Guiding You Toward Financial Security SCHEDULE A FREE CONSULTATION TODAY

What You Need to Know About Tax Evasion 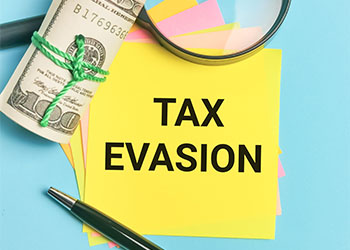 According to the Internal Revenue Service (IRS), since 2001, the average voluntary tax payment rate has been 83.6 percent. With collection efforts, tax collection of all dollars owed rises to 85.8 percent, leaving an annual gap of $381 billion uncollected. In other words, about one in every six dollars owed in federal taxes goes unpaid annually.

The current administration has been examining enforcement and detection efforts that can close the gap, including requiring banks to report all deposits into checking or savings accounts of $600 or more, but so far, the effort has stalled in the Senate.

Tax evasion can take two obvious forms – not filing a tax return or underreporting income on a submitted tax filing.

If you are facing a tax evasion charge in or around Fort Lauderdale, Florida, contact me at Zuckerman Law, LLC.

In addition to my law degree, I also have a master’s degree in tax law. For the past 30 years, I have been helping individuals and businesses with tax matters, including those who failed to file and underreported. I proudly serve clients throughout South Florida, including Miami, Boca Raton, North Miami Beach, Sunny Isles, Hollywood, and Aventura.

Tax evasion generally involves a willful act of either not filing, or not reporting specific income to avoid tax liabilities. Tax avoidance, on the other hand, is a perfectly legal option. Tax avoidance includes paying income into a qualified retirement account such as a 401(k) or giving to charitable organizations to gain a deduction on your tax filing.

Examples of tax evasion include, in addition to not filing at all:

However, under the Tax Cuts and Jobs Act of 2017, which is still in effect, many deductions have been eliminated for individuals, and deductions for property taxes and mortgage payments have been capped. Businesses, however, still have a wide berth for tax evasion based on deductions and other strategies, including in addition to the above:

What Is Tax Fraud?

Tax fraud occurs when an individual or business willfully and intentionally falsifies information on their tax return in order to avoid paying all taxes due. The penalties can be severe. If you are convicted of fraud and false statements, you can be subject to both criminal and civil penalties, including imprisonment of up to three years, along with a fine of up to $250,000 for individuals and $500,000 for corporations.

If you are convicted of evading the payment of taxes altogether, the prison term rises to a maximum of five years, but the fines remain the same. Both of these crimes are felonies.

Difference Between Tax Fraud and Negligence

Negligence consists of making a careless mistake in filing your return and paying your taxes. The filer doesn’t realize they made a mistake until notified by the IRS. A negligent filer could be subject to repayment of what’s owed plus interest. There could also be civil penalties, but not criminal prosecution.

Remember that tax fraud needs to be willful and intentional, which is a higher bar to prove if the IRS decides to prosecute you. The IRS must assemble strong enough evidence to win a conviction in court.

There is also a six-year statute of limitations. If you committed tax evasion more than six years ago, you likely cannot be prosecuted, but the IRS can still audit tax returns no matter how old they are and assess fines and penalties for what you failed to pay.

You may be able to claim that you simply forgot to file or that it was all a mistake. You and your attorney, of course, can also challenge the evidence brought against you. In a criminal case, the prosecution will have to prove your guilt “beyond the shadow of a doubt,” which is a high bar to meet. They must prove that your actions were willful and intentional.

Getting Experienced Guidance You Can Trust

Though the Biden administration has not yet passed a reconciliation measure that would amend the banking laws to force reporting of deposits into your bank accounts, they did tweak rules that require PayPal, Venmo, CashApp, and other money transfer services to report transactions. So, the avenues for concealing income are tightening.

Given the penalties for tax evasion, it is never a good idea to deliberately conceal, underreport income or use other methods to avoid taxes.

If you do run into difficulties with the IRS over your tax filings, however, contact me immediately at Zuckerman Law, LLC. I have been helping individuals and businesses in South Florida for more than three decades dealing with tax issues. I stand ready to bring my knowledge and experience to your situation. I proudly serve clients in Miami, Boca Raton, North Miami Beach, Sunny Isles, Hollywood, Aventura, and Fort Lauderdale, Florida.